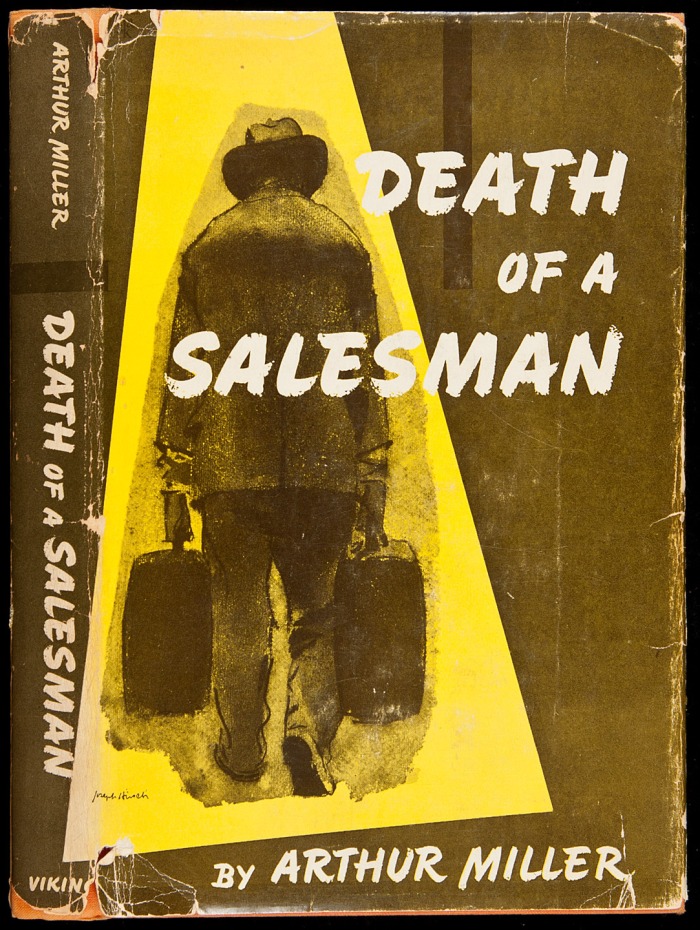 Last term I taught Arthur Miller’s play Death of a Salesman (1949). Each time I teach it, I see something different; some unexpected facet of it comes to light. This time round, I realised that almost all of the texts in our school’s IB English course deal with failure. Madame Bovary? Washed-up adulteress commits suicide. Macbeth? A man becomes king after murdering his ruler and his best friend, and then dies a friendless tyrant. The Cherry Orchard? Hopelessly inept aristocratic family lose their land. A Streetcar Named Desire? Aging Southern Belle fails to get a beau, is assaulted by her brother-in-law and goes mad.

This has prompted me to wonder at the prevalence of failure in literature. As a culture, we laud success, televise it, award it laurels. We exhort our young people (and ourselves) to ‘follow the dream’. But even as these words are on our lips, we know that life is not that simple, nor should it be reduced to a single idea. Self-help books teach us how to succeed – but is it possible we learn at least as much about how to live from the literature of failure?

As it happened, our class was studying Salesman at about the same time as my students had to submit their preferences for university courses to the relevant authorities. While we were immersed in the awful dramas of the Loman household, my students were having to examine what ideals they had about their lives and what model of ‘success’ they were going to adopt as they make the journey into adulthood. This became a topic of class discussion. Study to qualify at a preferred profession figured high on their list. Some also listed marriage and having a family as something important that they aspired to. Still others talked about having special kinds of experiences such as travel. A minority mentioned what might be termed more ‘spiritual’ aspects of life – attaining happiness or learning to ‘live in the moment’.

For most young people, their ideas about success will be interim measures: as life takes hold and increases its demands, they will probably modify their measures of success as, at best, misrepresentations of life’s complexity. Chances are they will succeed at the tasks currently set out for them – to sit their exams and get a series of marks that will allow them to take on further study. And this is important, because it gives them opportunities to pursue some of life’s more interesting paths.

But is success the same as the ‘good life’? Teaching Death of a Salesman has made me wonder about the double-edged nature of dreams and how their mesmerising power can lead us to confuse a good life with rather simplistic measures of achievement. When we construct criteria for success, we also, inadvertently, develop the criteria for failure. When we talk so much about dreams and goals, how are we preparing ourselves to absorb and honour the lessons of failure?

Willy Loman and his family have something to teach us about the nature of dreams. Despite the sixty years that separate the play’s first performance and our time, we have a lot in common with Willy and his boys. Between Miller’s peak-capitalist context to our own late-capitalist lives, there is still the common element of individual freedom in a largely secular society; hence each of us is required to come up with a sense of narrative or purpose with which to organise our lives. Without this, we can end up feeling that there is just random, arbitrary experience without any sense of meaning.

Willy’s son, Biff, expresses this, when he says that life as a ranch-hand is not enough for him, despite his joy in its day-to-day pleasures: “whenever spring comes to where I am, I suddenly get the feeling, my God, I’m not getting anywhere. What the hell am I doing, playing around with horses, twenty-eight dollars a week!” Biff actually enjoys his life as a ranch-hand, but he disparages it because it does not meet the criteria for achievement he has in mind. Miller’s play is rich in ideas and cannot be reduced to a single message. However, this year the play seems to pose a particularly pertinent question: Are dreams necessary?

For our ancestors, religion and its goals provided a framework for meaning that meant there was less pressure on the individual to provide it out of the raw stuff of their lives. Or, rather, the raw stuff was woven into the larger shared story of religious faith. Through daily life, each person was working towards salvation – and salvation was available to all, noble and humble commoner alike.

But in our pluralist, mass society, even if we do subscribe to a religious creed, we are essentially individualist. The onus is on us, as individuals, to make a ‘success’ of our lives and to decide what it all means. In a commercial, consumerist society, this mostly translates into material success and status, or, as Willy says, “a man has got to add up to something.”

In Miller’s play, Biff’s anxiety about his shapeless life suggests that dreams are, in a way, necessary. As Charley says in the play’s “Requiem”, “a salesman is got to dream … it comes with the territory”. We are all, in a way, ‘salesmen’; compelled to sell our labour, time, attention, skills, and ideas to make a living. To give all this selling value and shape, we construct goals and ideas of success towards which we work. But does success, construed as realising our dreams, actually deliver the meaning we think it will? Early in the play Biff’s younger brother Happy expresses this doubt, “I don’t know what the hell I’m workin’ for. … it’s what I always wanted. My own apartment, a car, plenty of women. And still, goddammit, I’m lonely.”

Perhaps it is the nature of the Loman family’s dreams that are the problem, or a misunderstanding of what dreams can do for them. Miller’s play suggests, through the voice of Biff, that some dreams are “wrong” and “phony”. By contrast, Happy argues that “the only dream you can have” is to “come out number-one man”, a disheartening view of life that demands that one person’s success depends on a host of others enduring failure. Happy, it is suggested, has not learned from his loneliness at the end of each day as he sits in his apartment. His answer to the emptiness he feels is that he simply has not yet accrued enough of the simple signs of success his culture promotes.

Yet, Biff’s answer – a rejection of dreams altogether – is also unsatisfactory. The closest he comes to articulating a view of the good life brims with an existential appreciation of impressions and experiences, “I stopped in the middle of that building and I saw – the sky. I saw the things that I love in this world. The work and the food and time to sit and smoke.” Nonetheless, Willy’s older son remains haunted by a sense of failure and aimlessness.

Teaching Death of a Salesman has prompted me to think about whether we need to dream with more imagination and with a little scepticism about what our dreams can reasonably do for us. Willy’s dreams for Biff seem both wildly unrealistic and vague – something to do with the trappings of success, rather the content of the work. He brings his boys up to be “rugged, well-liked, all-around” and “big in no time”, but the precise life he hopes for Biff beyond a college football scholarship is left undefined. He just wants Biff to realise the “all kinds a greatness” in him. Such wild demands ensure that dreams are standardised and tyrannous – such dreams do not come from Biff and what he truly loves, but are informed by anxieties about money and status. They also imply that reaching a dream sweeps away all of life’s difficulty and inherent lack. Most destructively, they set up Biff for failure, for no actual life could reach this father’s dreams of permanent transcendence – the star that “can never really fade away.”

Our fixation on dreams of success can, rather than freeing us to imagine and respond to life as it is, deaden us. In his essays “On Success” and “Futures” British psychoanalyst Adam Philips invites us to consider the ‘good life’ as an ever-widening repertoire of stories and ways of being. He also asks us to entertain the possibility that dreams are not entirely useful. As limiting theories about the criteria of ‘success’, dreams can inhibit our ability to live gracefully. Perhaps it is just as well that so much of our literature is about failure – studying it provides one of the few avenues in which we can consider its value. Perhaps we need to admit that we cannot replace that lost world of religious faith with an idol of personal success – life is too big a burden for such a puny god to carry.